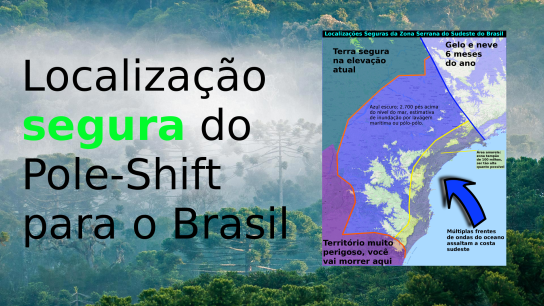 This video has been a year in coming to completion, partly because of other stuff I’ve been needing to do, yet the work continued meanwhile.
For the Pole-Shift, Brazil has two major events happening to it that most other other countries will not have to face. First is the fact that just 1000 miles or so off the east coast of Brazil, the new North Pole will be established during the Pole-Shift placing eastern Brazil within the new Arctic Circle. Unfortunately, this frozen land will shrink the livable-land area of Brazil for the After-Time, yet conversely, Brazil does have a plenitude of high and safe land to settle to the west. The second event is the rising of a new subcontinent from the sea floor just east of the southern tip of South America. These two events were predicted by ZetaTalk, but what the Zetas of ZetaTalk did not say is precisely where the new dry land subcontinent will be. During my over 8 months of sporadic work on this video I studied the sea floor and happened to find where it will be located. Currently, this new land is known as the “Scotia Plate”. To wit, I have compiled a small format video from another video I found on YouTube (which was discussing an entirely different subject), this piece is presented within my video. This rising land will dramatically increase the amount of sea water assaulting the east coast of Brazil during the Pole-Shift. Within the video I discuss how to safely re-locate in the south coast area. Another scenario that will play-out during the early After-Time, will be the flooding of the Amazon basin. Again, this event, although common in many parts of the globe for the After-Time such as eastern Russia and the southern parts of North America, will displace many Pole-Shift survivors living along the Amazon river and it’s tributaries. This migration of people to dry land will cause much strife around the perimeters of the Amazon Basin, including the new western extents within the Cerrado of the new and smaller Brazil.  However, it is unlikely that the those Amazonian supplanted by the pole-melt will venture too far into the Cerrado, as the new inland sea will be the greatest source of food for Brazilians.
Within the video I also have a section that basically explains what Planet X is, it’s trajectory, it’s orbit and how the Pole-Shift happens with special emphasis for Brazil.