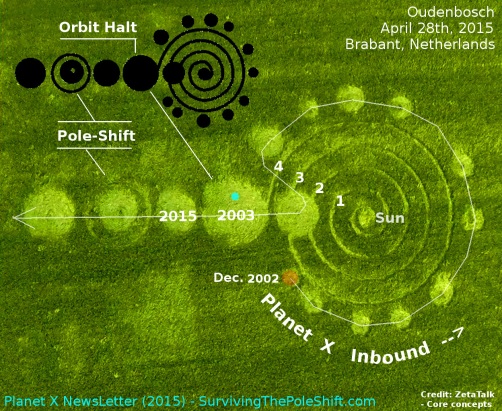 In this Issue I cover 4 stories, one of which is very expansive in it’s scope and much larger than the others. This particular article (Planet X-Effected Earth-Changes Slow-Down) covers the reason why we are still waiting for massive Planet X-effected Earth-changes on a global scale.Planet X has been on the ecliptic since 2004 and has been progressing solar-system north-ward ever since. As it progresses, mile-by-mile to it’s inevitable release from the ecliptic, a cosmic-wind-inflood-zone, Earth must retreat in it’s orbit. Meanwhile, Earth’s 3rd magnet, the mid-Atlantic ridge, is grabbed for a few seconds/minutes by the magnetic field of Planet X twice daily to deliver a west-ward moving compression-wave that is shaking-loose the fault lines of Earth’s crust. ZetaTalk categorizes Earth’s reaction to this lateral-hammering with a #-out-of-10 scale of massive geological events. We are still at the tail end of the 7-out-of-10 while the 8 is only beginning to develop.
Now what could possibly slow-down such a massive and complex scale of influences, and who would have the power and influence to apply such a thing? And Why? …Why would the inescapable be postponed? This is where the state-of-Soul development of a (fairly large) fraction of incarnated humans comes into play. Besides these reasons, what would the mechanics of such a slow-down look like and how would they be implemented? Such questions are answered in the main story.
From this issue: “The complete picture of Earth’s geographic Pole-Shift, with it’s history of the prior passages of Planet X, the path of Planet X through our solar system identified, the known effects it will have on Earth and even with the lives of billions of people in the balance, would not be complete without the spiritual aspects included.
Now obviously, anyone commenting on “spiritual aspects” in this world is subject to the same fog of human knowledge as the next person, yet there are things that can be said with some confidence that are not readily apparent. That said, the following piece includes seven massive concepts that I am bringing together in the most difficult piece I’ve ever written. These are: Earth’s spiritual hierarchy, the state of incarnated-Soul on Earth, the transition of Earth to the next dimension, the Pole-Shift itself, the natural electromagnetic resonance frequency of Earth, the concept of Earth as a spiritual persona (Gaia) and the slow-down of the Planet X-effected earth-changes on Earth. I will explain and/or touch on each concept with the intention to reveal how there is a common thread that interconnects them all to the main subject.”